Attack on mosque described as a ‘heinous’ and ‘senseless’ crime | News24 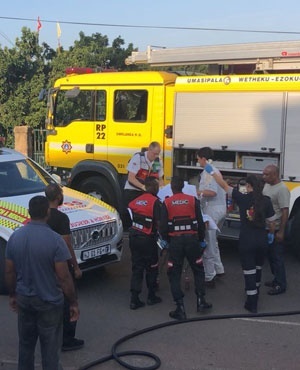 Critics have described the attack on the Imam Hussain Mosque in Ottawa, Verulam on Thursday as a “heinous attack” and “totally unjustified”.

Three men stormed the mosque on Thursday afternoon, stabbing two people and slitting the throat of another man who died in hospital as a result of his extensive injuries.

The Muslim Judicial Council of South Africa “vehemently condemned” the attack on the mosque.

Shaykh Isgaak Taliep, secretary general of the Muslim Judicial Council, called the attack on the mosque a “senseless crime” against three innocent individuals.

“We reiterate and emphasise the core Islamic teaching and principle of ‘respect for all human beings’,” Taliep said.

“We… call on all communities to remain law-abiding citizens and refrain from any and all forms of vigilantism.”

Taliep said the council called on the police and other government structures to ensure the necessary criminal investigations are done so “the perpetrators and criminals can be brought to book and face the full might of the law”.

Zev Krengel, the vice-president of the South African Jewish Board of Deputies, said the organisation sent its thoughts and prayers to the victims of “this horrific attack” and the South African Muslim community.

“The South African Jewish Board of Deputies condemns in the strongest possible terms the attack in a mosque in KwaZulu-Natal,” Krengel said.

“Places of worship should always provide a safe space and its sanctity should be respected.”

Parliament’s Portfolio Committee on Police also condemned the attack and called it shocking.

“A mosque is a religious institution and South Africa’s Constitution guarantees and protects the right to religious practices,” said chairperson of the committee Francois Beukman.

“This kind of attack on three innocent people is totally unjustified. We want our communities to live in harmony, practising their religions without fear.”

He said there had been reports of prior attacks on mosques in the province.

Beukman said “everything” should be done to arrest the perpetrators and he called on anyone who has information about the attackers to contact the police.

Source: Attack on mosque described as a ‘heinous’ and ‘senseless’ crime | News24