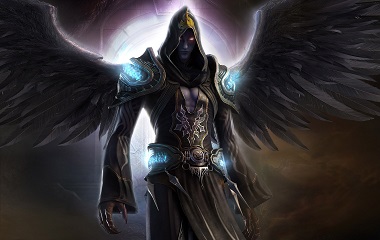 Azazel is the chief of the Se’irim, or goat-demons, who haunted the desert and to whom most primitive Semitic (most likely non-Hebrew) tribes offered sacrifices. The Old Testament states that Jeroboam appointed priests for the Se’irim. But Josiah destroyed the places of their worship, as the practices accompanying this worship involved copulation of women with goats.

The Se’irim, or hairy demons as the word itself means, are mentioned in Leviticus 17:7 and 2 Chronicles 11:15 as “goat-demons”. Isaiah 34:14 says that the “goat-demons” greet each other amoung the ruins of Edom along with Lilith and other wild beasts.

The name ‘Azazel’ may be derived from ‘azaz’ and ‘el’ meaning ‘strong one of God.’ It is thought that Azazel may have been derived from the Canaanite god, ‘Asiz, who caused the sun to burn strongly. It has also been theorized that he has been influenced by the Egyptian god, Seth.

Leviticus 16:8 tells that the Lord ordered his high priest, Aaron, to ‘place lots upon the two goats, one marked for the Lord and the other marked for Azazel’ on the Jewish Day of Atonement. The goat designated by lot for the Lord is to be used as a sin offering, while the goat designated for Azazel “shall be left standing alive before the Lord, to make expiation with it and to send it off to the wilderness for Azazel.” (Lev 16:10) Aaron was to “lay both his hands upon the head of the live goat and confess over it all the iniquities and transgressions of the Israelites, whatever their sins, putting them on the head of the goat; and it shall be sent off to the wilderness through a designated an. Thus the goat shall carry on it all their iniquities to an inaccessible region; and the goat shall be set free in the wilderness.” (Lev 16:21-22) Leviticus also says that “He who set the Azazel-goat free shall wash his clothes and bathe his body in water; after that he may reenter the camp.” (16:26)

From this passage in Leviticus, it would seem that Azazel is conceived of as a personal being, as lots were drawn for the Lord and for him. Also, Leviticus mentions that Azazel lives in the wilderness, as do the Se’irim. Because of this ritual, Azazel is known as the “scapegoat.” The goat that is sent to Azazel is not as a sacrifice, but as a symbol that there is no longer any unexpiated guilt. Both the goat and the man who leads away the goat are unclean, and the only way the man can reenter the camp is by washing his clothes and bathing.

Azazel in The Book of Enoch 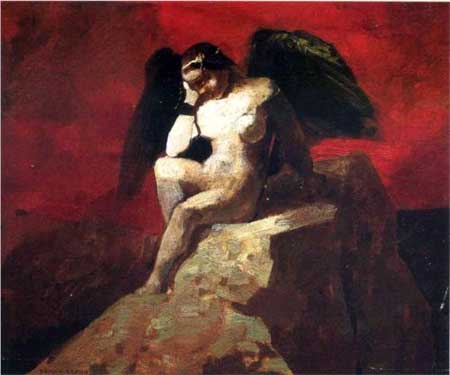 In one account of the fall of the angels in the Book of Enoch, Azazel (Asa’el as in the Qumran texts) is the leader of the Watchers who educates humankind of heavenly secrets that lead humankind to sin. These teachings include making weapons of war and preparing cosmetics, which enabled the women to seduce the angels.

The angels then charge Asa’el before the Lord with crimes of revealing the heavenly secrets which mankind was not supposed to know. Raphael was then assigned to punish Asa’el by binding him hand and foot and throwing him into the darkness among the sharp and jagged rocks, where he would remain until the day of judgment when he would be hurled into the fire. The story then claims that “the whole earth has been corrupted by [Asa’el’s] teachings of his (own) actions; and write upon him all sin.” . It was because of Asa’el’s teachings that God sent the Flood to destroy the evil in the world including even the souls of the giants, so that all evil will be wiped away from the face of the earth.

“And Azazel taught the people (the art of) making swords and knives, and shields, and breastplates; and he showed to their chosen ones bracelets, decorations, (shadowing of the eye) with antimony, ornamentation, the beautifying of the eyelids, all kinds of precious stones, and all coloring tinctures and alchemy.” – 1 Enoch 8:1

Azazel in the Apocalypse of Abraham

In the Apocalypse of Abraham, Azazel is portrayed as an unclean bird which came down upon the sacrifice which Abraham prepared. This is in reference to Genesis 15:11 “Birds of prey came down upon the carcasses, and Abram drove them away.”

“And the unclean bird spoke to me and said, ‘What are you doing, Abraham, on the holy heights, where no one eats of drinks, nor is there upon them food for men. But these all will be consumed by fire and ascend to the height, they will destroy you.’ And it came to pass when I saw the bird speaking I said this to the angel: ‘What is this, my lord?’ And he said, ‘This is disgrace, this is Azazel!’ And he said to him, ‘Shame on you Azazel! For Abraham’s portion is in heaven, and yours is on earth, for you have selected here, (and) become enamored of the dwelling place of your blemish. Therefore the Eternal Ruler, the Mighty One, has given you a dwelling on earth. Through you the all-evil spirit (is) a liar, and through you (are) wrath and trials on the generations of men who live impiously.” – Apocalypse of Abraham 13:4-9

The Apocalypse of Abraham also associates Azazel with Hell. Abraham says to him “May you be the firebrand of the furnace of the earth! Go, Azazel, into the untrodden parts of the earth. For your heritage is over those who are with you” (14:5-6) There is also the idea that God’s heritage (the created world) is largely under the dominion of evil. It is “shared with Azazel” (20:5) Azazel is also identified with the serpent which tempted Eve. His form is described as a dragon with “hands and feet like a man’s, on his back six wings on the right and six on the left.” (23:7)

Finally, the Apocalypse of Abraham says that the wicked will “putrefy in the belly of the crafty worm Azazel, and be burned by the fire of Azazel’s tongue.” (31:5) Here again, there is another reference to Azazel as being Hell.

Azazel is guardian of goats. On the 10th day of September, on the feast of the Expiation, it was Jewish custom to draw lots for two goats: one for the Lord and the other for Azazel. The goat for the Lord was then sacrificed and its blood served as atonement. With the goat for Azazel, the high priest would place both of his hands on the goat’s head and confess both his sins and the sins of the people. The goat (“scapegoate”) was then led into the desert and set free. Azazel then returned the goat. Milton described Azazel as the first gate-teacher of the infernal armies. Azazel is also the name of the demon that serves Mark the heretic.