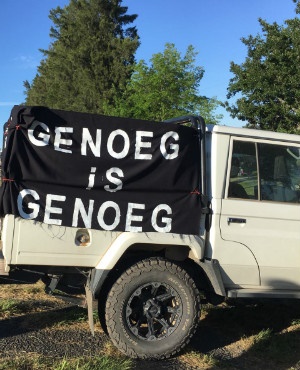 Vryheid – A member of the Vryheid community policing forum says the attack on Bokkie Potgieter, 73, who died after allegedly being repeatedly hit with a panga on Monday, was so brutal that his face was left unrecognisable.

The man who killed him was also apparently beaten by residents after he crashed Potgieter’s bakkie. He later died.

Braam van Niekerk snr told News24 that after the attack, the suspect dragged the dying elderly man by the feet and shoved his body head first into his own bakkie and drove off with one of Potgieter’s feet dangling from the window.

The incident happened in KwaDikadika, Gelukstad, in KwaZulu-Natal. Provincial police earlier said the 73-year-old man was not a farmer. Van Niekerk also confirmed to News24 that Potgieter was not a farmer.

“For the time that I have known him, he was not a farmer. He was a retired man,” Van Niekerk said.Potgieter, who was “a very lonely man,” had lived in the area for the past 10 years, said Van Niekerk.

He said Potgieter was attacked at around 10:00 on Monday morning while he was reportedly building a chicken run. Suspect allegedly attacked by community”The man [the suspect] was a wanted man in the community.

He has been known for housebreaking and other crimes in the area. He hit the ‘oubaas’ [Potgieter] in the face and stole his bakkie. “Van Niekerk said the suspect then loaded Potgieter’s body into the vehicle and drove off but hit a pole after about 400 metres “and could no longer drive”.

Van Niekerk said community members saw the accident and went to investigate. When they got closer they noticed Potgieter’s lifeless body in the vehicle and took the suspect out of the bakkie.

“Community members allegedly attacked the suspect and he died a little later after the incident,” Van Niekerk said.

‘He was not a farmer’On Monday, AfriForum’s Ian Cameron told News24 that the victim was a farmer, however KwaZulu-Natal police spokesperson Captain Nqobile Gwala denied that he was.

This came as the #BlackMonday protest against farm murders was held around the country.

Gwala said Potgieter was living in the community after the local induna (chief) felt sorry for him and allocated him a piece of land.”He built himself a mud house and was not a farmer.”

She said the area was not a farming community.”The area is very rural and people live in rondavels, it is not a farm and the deceased is not a farmer, he was an ordinary member of the rural community,” said Gwala.

Another member of the Vryheid community policing forum, Riaan Lotter, said he did not know Potgieter. “We are a small community where everyone knows everyone.

I am not aware that he was a farmer and I have spoken to several farming friends and they don’t know him either.” Lotter said farm attacks were a common occurrence in the Lenjani and Kangani area.

“About a year and a half or two years ago, we lost two farmers on one day. A farmer was killed in Paulpietersburg seven months ago. It is really bad.”

Lotter said farmworkers were allegedly involved in most of the farm attacks.” They are never directly involved but the criminals, most of whom are not from the community, force the farmworkers to give them information about the farmers and because they fear for their lives, they give them the information.”

They cannot even tell the police because they are scared. But look at what happened today, the local community is getting fed up. I think that there is a perception that farmers keep money and weapons on their farms and that is what makes them targets.”

Lotter said the police were frustrated by a lack of resources. “We are putting pressure on government to assist the police because it is not that they don’t act, they are just under resourced. In our area, we have one bakkie and two policemen tasked with dealing with farm attacks,” he said.