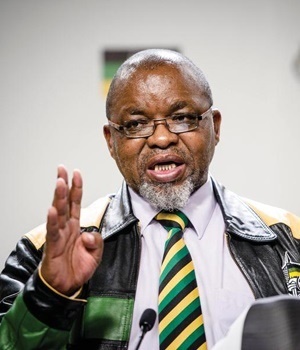 Pretoria – The African National Congress might not have placed the South African Council of Churches (SACC) report into state capture on their agenda, but it can still be used in debates during its national executive committee (NEC) says ANC Secretary General Gwede Mantashe.

He was speaking on the sidelines of the of the three day meeting at the St George’s Hotel in Tshwane on Saturday. The ANC is expected to discuss the journey towards both its national policy conference in June and its 54th national elective conference in December.

Mantashe said current events would also form part of discussions, however he refused to indulged journalists who pressed him for details. The country has experienced a number of scandals since the NEC’s last sitting, including President Jacob Zuma’s midnight cabinet reshuffle; the return of disgraced former Eskom CEO to the electricity provider; rolling anti-Zuma protests and more allegations of state capture.

The SACC’s unburdening panel released a report which is said to reveal damning information on current and former government employees on how the state has been captured by private individuals.

This week several academics from some of the country’s universities also released their own report into the issue – they described the phenomenon as a “soft coup”.

Mantashe said they had seen the SACC’s report, but it was not on the NEC’s agenda. Religious leaders-an item which ANC stalwarts had hoped to have included in discussions was a letter they sent to the NEC.

Former leaders of the party told journalist during the week that they had a feeling their discussions with ANC officials were not finding expression with the executive committee of the party.

The stalwarts, who proposed a national consultative conference to help the 105-year-old liberation movement renew and recommit itself to the founding values of the party, said they were not happy with how their efforts were being handled and communicated by leaders.

The ANC NEC previously agreed to a consultative conference, but gave two days of the June policy conference to do this. Stalwarts however wanted a separate conference and interim leadership to take the party to the national conference to elect new leadership.

Mantashe dismissed the stalwarts’ letter saying it was not directed at the party. “When you write an open letter it’s not correspondence with the ANC…it’s an open letter…it’s in the public,” he said.

The stalwarts called on the NEC to consider getting rid of Zuma as the country’s head of state, but Mantashe said the recall of the president was not on the agenda.

Source: Council of Churches report on state capture can be used in NEC discussions – Mantashe | News24