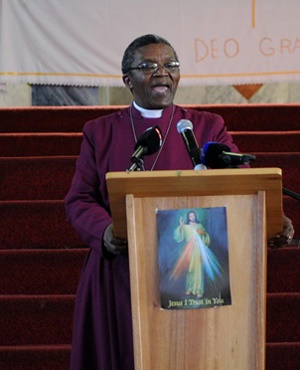 Soweto – The South African Council of Churches has warned that the country risks collapsing if the ANC does not act on the “systematic siphoning of state assets pivoted around President Jacob Zuma”.

“The country is going to collapse. It is difficult to rebuild once you go into lawlessness,” SACC secretary general Malusi Mpumlwana said. SACC launched its “Unburdening Panel” report that put together damning allegations of corruption in various multi-billion rand tenders, including the R50bn Transnet locomotives, nuclear deal, Eskom’s coal contracts, and the partnership between VR Laser and Denel.

It was launched at the historic Regina Mundi church in Soweto.  The SACC began compiling the report after the ANC’s failed probe into allegations of state capture.

It was triggered by former deputy finance minister Mcebisi Jonas’ allegations that the Gupta family had offered him R600m to take up the finance minister post, and Vytjie Mentor, who alleged that the family offered her the public enterprises post if she would drop the SAA flight route to India in 2016.

Mpumlwana said the “unburdened panel” offered a “safe space” for individuals who had been pressured to participate in corruption. “It soon became apparent that there were discernible patterns of the systematic undermining of governance that go beyond petty corruption, so as to seriously threaten the constitutional democracy,” Mpumlwana said.

‘Power elite pivoted around president’-He said they had uncovered that the problem was far greater than mere corruption, but also the organised chaos and instability in government. “A careful analysis makes the case for the following observable trends of inappropriate control of state systems through a power elite that is pivoted around the President of the Republic and is systematically siphoning the assets of the state,” Mpumlwana said.

He said this was done through:-

However, when asked if Zuma was corrupt, Mpumlwana said the jury was still out, but said the government had lost moral legitimacy.  ‘Mend the ways of government’-He said they did not want to prescribe to the ANC what action to take, but said, as the governing party with power over the state, it should act fast.

“We urge the ANC, as the governing party, to examine itself and mend the ways of government, before we reach the point of no return – for this has implications for the ANC in government, for its leadership and members,” Mpumlwana said.

The SACC said it would not be laying charges, despite using lawyers and researchers to compile the report. Their next action would be determined by its conference in June.

The report would also be shared with member churches across the country, with a final decision on what action they expected to be taken during the SACC’s June conference.