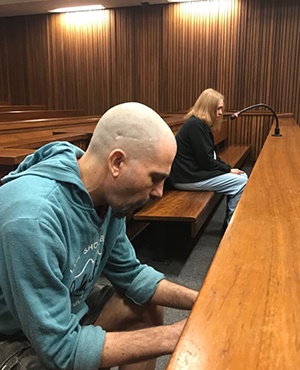 The grandmother of Poppie van der Merwe said she could finally rest after the North Gauteng High Court in Pretoria sentenced the toddler’s killers, Louisa and Kobus Koekemoer, to life behind bars.

Poppie was only three years old when she died in Brits in October 2016. She had been abused for eight months by her mother and stepfather.

Maternal grandmother, Carla Van Der Merwe, said she did not recognise Poppie after the abuse.

“You can see the beating on the face, the mouth.”

She said the family would now be able to pick up the pieces and try to move on with their lives, which have been burdened with grief since Poppie’s death.

Judge Bert Bam labelled the Koekemoers inherently evil and sentenced them to life in prison for Poppie’s murder and an additional 10 years for child abuse involving two other minor children.

In his sentencing, Bam said that the accused did not show any remorse for her murder and that they most likely only regretted being caught.

Speaking about the day she died, Bam said both accused showed little, if any, mercy to Poppie. He said that, by the time Kobus had taken Poppie to hospital, she had already been dead for several hours.

Bam found it most aggravating that Poppie had to endure months of abuse before her death and that it began when she was a little older than two years.

He added that the assaults were so severe that Poppie probably lost consciousness on several occasions.

He said this was evidenced by her mother’s mentioning of her “playing dead”.

Bam added that Poppie’s injuries were violently inflicted and that it was very difficult to look at the post mortem photographs during the trial.

During evidence in mitigation of sentence, Louisa testified and broke down several times.  She said she was the product of a broken household and that she had been raped and molested by her stepfather over several years.

“He made me believe it was my fault that he raped me,” she said.

“If I don’t get involved, then the kids won’t be hurt as much,” she said.

Louisa added that she did not leave Kobus because she was scared that he would hurt her and the children. However, she told the court that he never assaulted her.

“I am so sorry. I am very sorry that I didn’t help enough. I should have [helped] more. I didn’t know what to do,” she said.

In mitigation of sentence, Kobus’ advocate argued that, at the very least, took responsibility for his role in the assault and added that he had taken Poppie to the hospital.

Bam hit back and said Poppie had already gone into rigor mortis by the time she arrived at the hospital.

The abuse took place between September 2015 and October 2016 in various places, including Orania in the Northern Cape and Brits in Gauteng.

The couple were arrested after Poppie died.

Bam found that, although much of the evidence was circumstantial, it should be viewed as a “mosaic”.

He added that both accused had a duty to protect the children, but ended up blaming each other, which indicated they were both aware of what was happening.

Source: Judge says it was difficult to look at photographs of 3-year-old Poppie’s injuries | News24