KZN man hacked to death on a farm on #BlackMonday | News24 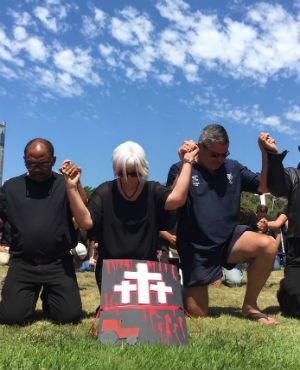 Durban – A 73-year-old man has been hacked to death on a farm in Vryheid, northern KwaZulu-Natal as the #BlackMonday protest against farm murders continues around the country.

AfriForum’s Ian Cameron told News24 that the victim was a farmer, however Gwala denied that he was. “The deceased victim is not a farmer and the incident is not related to the farm attacks,” Gwala said.

Gwala said the man was busy building a chicken kraal at KwaDikadika area, in Gelukstad farm, at about 10:00 on Monday when he was attacked with a bush knife.

“The suspect, believed to be in his thirties, attacked the deceased with a bush knife and dragged his body to a Ford Bantam bakkie. The victim’s vehicle crashed into the electricity pole and the community saw the victim’s vehicle and went to investigate,” she said.

A case of murder was opened at Glückstadt police station for further investigation.

Source: KZN man hacked to death on a farm on #BlackMonday | News24