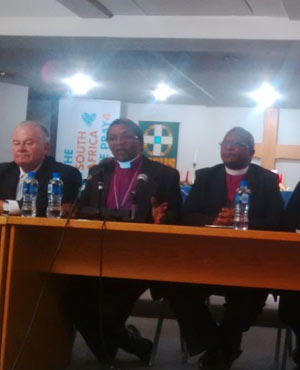 Johannesburg – The South African Council of Churches has called for a Truth and Reconciliation Commission (TRC) into corruption following the release of the State Capture report on Wednesday.

“The Gupta chapter is only one part of the larger tapestry of possible corruption and improper influence, and that for South Africa to be healed, we believe we should treat corruption with the same attitude that we treated the atrocities that were dealt with through the Truth and Reconciliation Commission (TRC),” SACC general secretary Bishop Malusi Mpumlwana said in statement.

The SACC held a press briefing to report on findings from its unburdening panel task-team report on Thursday. “We have been alarmed by the fear factor in the faces of the people that have wished not to be publicised.

People who have lost their jobs; people who fear for their lives; but who do want to say something to unburden themselves so that they can sleep with a measure of peace.

“He said the emergence of allegations linked to the Gupta family were a moment of God’s grace because, “it gave the country the opportunity of resolve to change for a better moral standard”

He said the SACC was profoundly shocked by the detail of what appeared to be calculated intrigue in the goings on in the report. “Considering that this inquiry was focused on a slice of possible activities that only relate to the Gupta family, we wonder what an investigation of the fuller extent of such improper relationships up and down the various levels of government might reveal or even if it focused on the various SOEs at both national and provincial levels.

The report criticises Eskom, slamming the company over improper hiring of its board and also asks questions about its deals with Gupta-linked mining company Tegeta as well as its purchase of the Optimum mine.

In the report, Eskom CEO Brian Molefe was shown to have a close relationship with the family, as evidenced by his visits to their Saxonwold home in Johannesburg, as well as his numerous phone calls to Ajay Gupta specifically.