Home Corruption ‘We are dealing with criminals with badges and gowns,’ says defiant O’Sullivan | News24

‘We are dealing with criminals with badges and gowns,’ says defiant O’Sullivan | News24 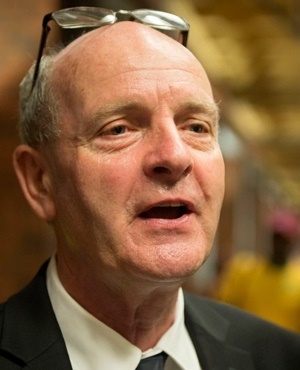 Pretoria – Private forensic investigator Paul O’Sullivan says he will not back down until certain “corrupt” people are behind bars.

“We are dealing with criminals – criminals with badges and criminals with gowns. They are going to go to prison for what they did. I will not stop,” O’Sullivan said following his appearance in the Pretoria Magistrate’s Court on Wednesday.

O’Sullivan’s comments come after the case, with co-accused assistant Sarah-Jane Trent and IPID officers Mandlakayise Mahlangu and Temane Binang, was struck from the roll.

The four appeared on charges of allegedly impersonating a police officer, fraud, extortion and contravention of the IPID Act, which they were charged with during their investigation into Phahlane.

On Wednesday morning, several charges relating to racketeering were served to the accused.

Thirty-four charges were in total brought against them.

O’Sullivan described his fight in court as the “forces of evil fighting the forces of good”.

He said the State was playing a “dirty” game and he was expecting it to bring more charges.

Magistrate Bheki Ntshingila said removing the case from the roll was not a “train smash.

“It is not the end of the case… the State should finalise their investigation”.

He said the matter had been delayed numerous times.

Earlier on Wednesday, Prosecutor Advocate Molatlhwa Mashuga had argued that if the matter was struck from the roll, the accused were going to be “aggressive” towards witnesses.

The alleged message read: “Your conduct will increase your years in prison”.

Ncube, who is part of a team of North West officers, along with Major-General Jan Mabula, was also present during proceedings.

The pair are under investigation by IPID for claims of torture and murder.

“The threat to witnesses is going to be continued,” Mashuga claimed.

News24 previously reported that the charges laid against O’Sullivan, Trent and IPID officers came days after it was publicly revealed that IPID was investigating billions of rands in police contracts awarded to businessman Keith Keating. IPID alleged that he paid for vehicles for former acting commissioner Khomotso Phahlane.

The latest charges allege that the four contravened the prevention of Organised Crime Act and that Trent, O’Sullivan and Mahlangu had “managed an enterprise”.

Source: ‘We are dealing with criminals with badges and gowns,’ says defiant O’Sullivan | News24